Unnecessary waste products sneak into our leaves in the most invisible little places – take the kitchen sink for example. Most people will have an array of steel and/or plastic sponges and scrubbers hanging around to wash their dishes. These, of course, all eventually end up in the bin – AKA landfill.

These days there are a vast range of kitchen scrubbers in the eco-products department that you can buy which break down in the compost pile which is fantastic. But did you know there’s pretty much always something you can grow yourself that will do the same job?

Growing up in sub-tropical Brisbane, we’d grow the luffa vine and use this in the bathroom and kitchen. In more tropical climates, people use coconut husk. Alas, it’s a tad cold in cool temperate Tasmania for either of those plants – hence our enthusiasm when Anton’s mum gifted us with a little broom millet (Sorghum bicolor) scrubbing bush all the way from (very cold) Sweden. We promptly went about sourcing some seed so we could grow our own, and one year later we now have our own little batch of broom millet scrubbing brushes. Here’s the full journey in pictures… Broom millet grows up to around 3m 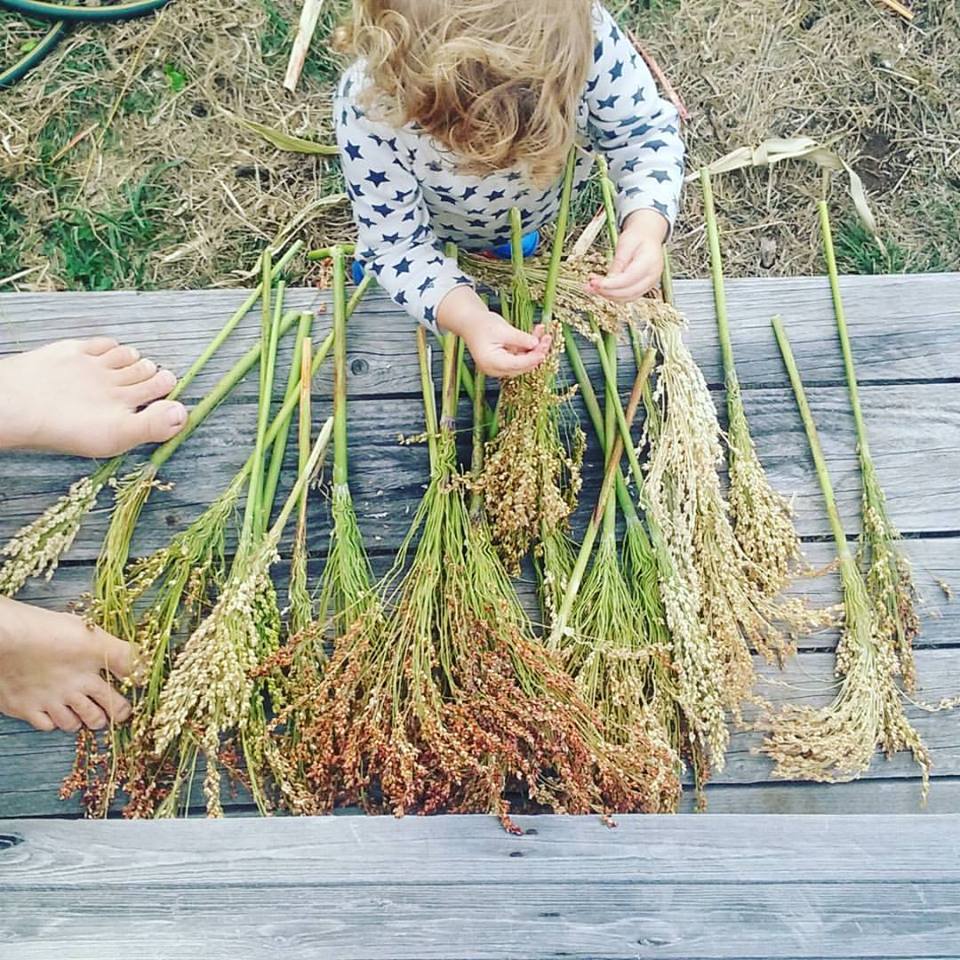 Harvesting and cleaning with Frida Maria. 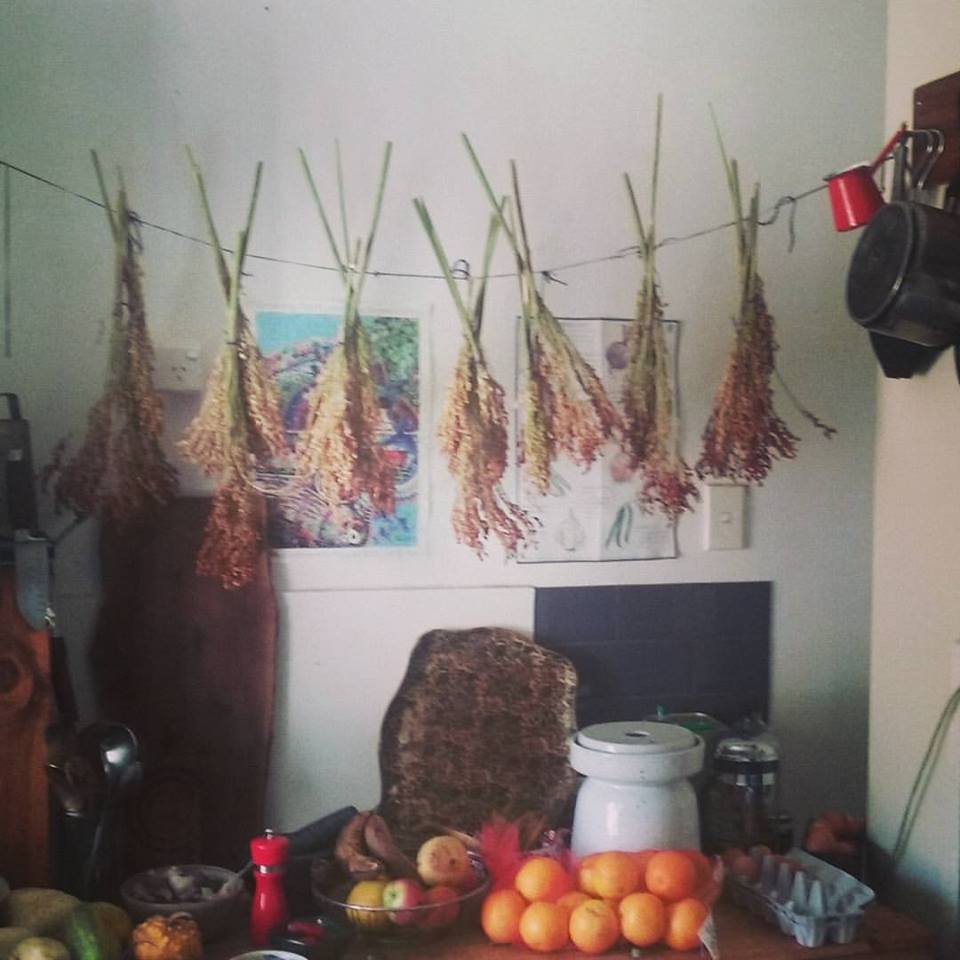 Hanging to dry in our kitchen.

Once you’ve grown, harvested and dried the seed heads thrash the seeds off the plant and save it for eating and/or for growing for next seasons (that’s what we’ll be doing).

THEN… Cut it into desired lengths and form a nice little bunch in your hand. Next you simply have to tie some string around it to keep it all together. We recommend using a waxed string as this repels water, preventing the string from becoming smelly with excess water hanging on. I just went ahead and roughly wrapped the string around and tied ten knots to keep it on. Then Anton walked into the room and proceeded to wow me with one of his sailor knots where it’s beautifully neat, you can’t see the finished knot and it’s approximately 100 times stronger than mine…. So I think you should know about it.

First, use some rubber bands (or equivalent) to keep your millet in place. Then lay the string out as seen below. Next, start wrapping your string neatly around your bunch, leaving the loop exposed at one end (the right in this case). Once you’re happy with the amount of wraps (i.e. run out of string), put the end you’re working with through the exposed loop. Gently and slowly, pull the other loose end of string (shown on the left in the photo below) until you’re pulling the looped end under the wrapped area. By doing this, you’re making a knot which ties off the whole thing. You’ll be left with two bits of string sticking out from either end of the wrapped area – just chop them off, remove the rubber bands and you’re done! 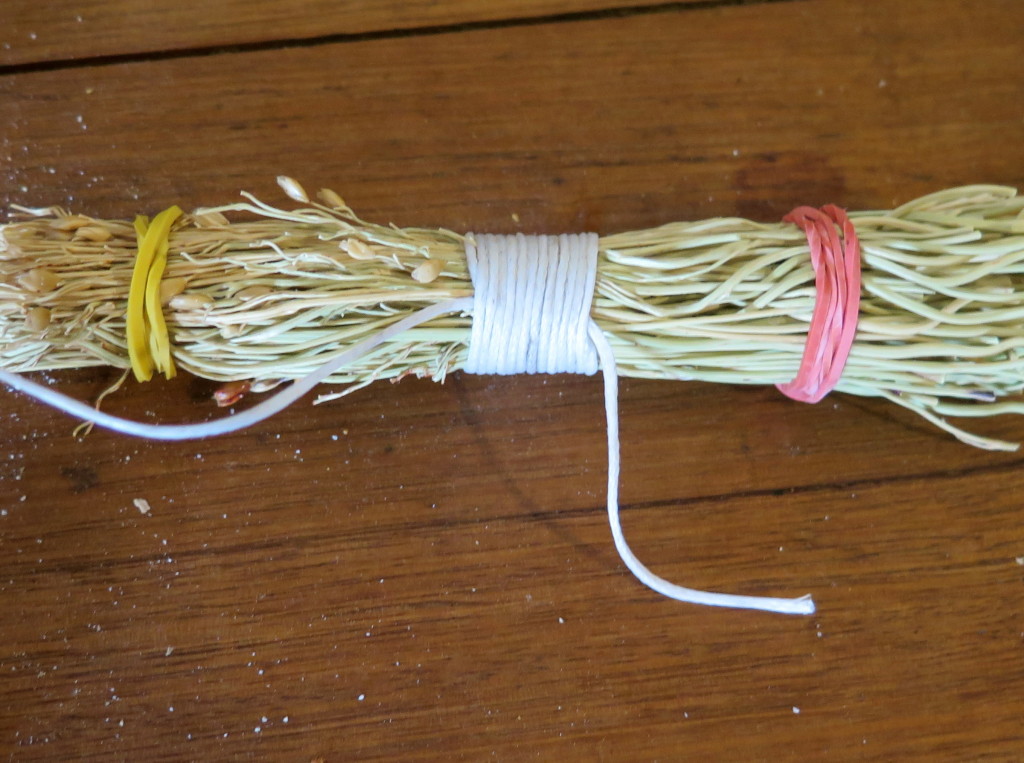 The patch of broom millet we grew was around 3m x 2m with approximately 25 plants. Of those plants, some seed heads were lost to birds and some didn’t form overly well. We ended up with seven scrubbing brushes from around 15 plants.

But interestingly, one scrubbing brush will last for over one year – we’re still using ours that was gifted to us well over a year ago. I’ve had to replace its’ string once, but otherwise the fibre is incredibly strong and still going. Technically this means we have over seven years of scrubbing brushes in the photo below! We trialled some different shapes (short and long) to see what we prefer.

Please note, all the bunches above are tied together using my slap dash technique and they’ve since been re-done using Anton’s sailor knot as shown earlier in this post.

The green string (seen above) is hemp which works fairly well, however we prefer waxed string which repels water and therefor lasts longer.