Beer! I don’t need to sing its praises but I think folks should know a bit about how it’s made, especially once you find out how amazing it can taste *and* how much money you can save from brewing your own.

Making beer is a process that definitely rewards effort. I (Anton) have been a homebrewer for almost two decades, and until recently would have described my approach as a bit hit and miss.  You see brewing beer is a fairly simple process.  You mix malted barley with water, boil in some hops and then add some yeast, wait a few weeks and drink.  Too easy, and I’ve been in the habit of throwing these ingredients around in fair disregard of any recipe or documentation.  The results are variable from great to not so great

Perhaps it was one of these “slap dash” home brews that inspired Hannah’s dad to give us the very excellent “Sustainable Homebrewing” by Amelia Slayton Loftus.  This remarkable read introduces homebrewing and takes the reader through the entire process of brewing beer, using whole grains and developing your own beer styles.  She also takes it to the next level with mushroom cultivation on the spent grains and even DIY vegemite…yep – she’s awesome. From reading this book I’ve learnt something extra about every aspect of the brewing process, deep details on the malting enzyme process or little tricks of what temperature to keep your mash for sweeter beers.  She also has a bucketload of award winning recipes, from  simple beginner beers to over the top trophy winners.  If you’re interested in taking up home brewing or taking it to the next level I heartily recommend this read.

I got so inspired by this book that I thought I should share the process of making beer from scratch (without the growing and malting barley bit).  This process is known as a “full mash” in brewing circles.

First up – grow some hops.  In temperate and cool temperate hops grow like crazy, getting to over 5 meters tall in a season.  The vine is cut down in autumn and hop flowers harvested and dried.  Of course, alternatively you can buy dried hops. Cascade hops growing amongst our orchard. The first step in the actual brewing process is weighing your malt and placing it into hot water.  It’s steeped somewhere between 65-68 degrees celsius for around 1 hour.  This process extracts the sugars from the malt into the hot water. I like to use a “hot box” to steep the grains.  Once the grain and water are at the upper limit of the correct temperature they are wrapped in blankets, doonas and pillows to stay warm. 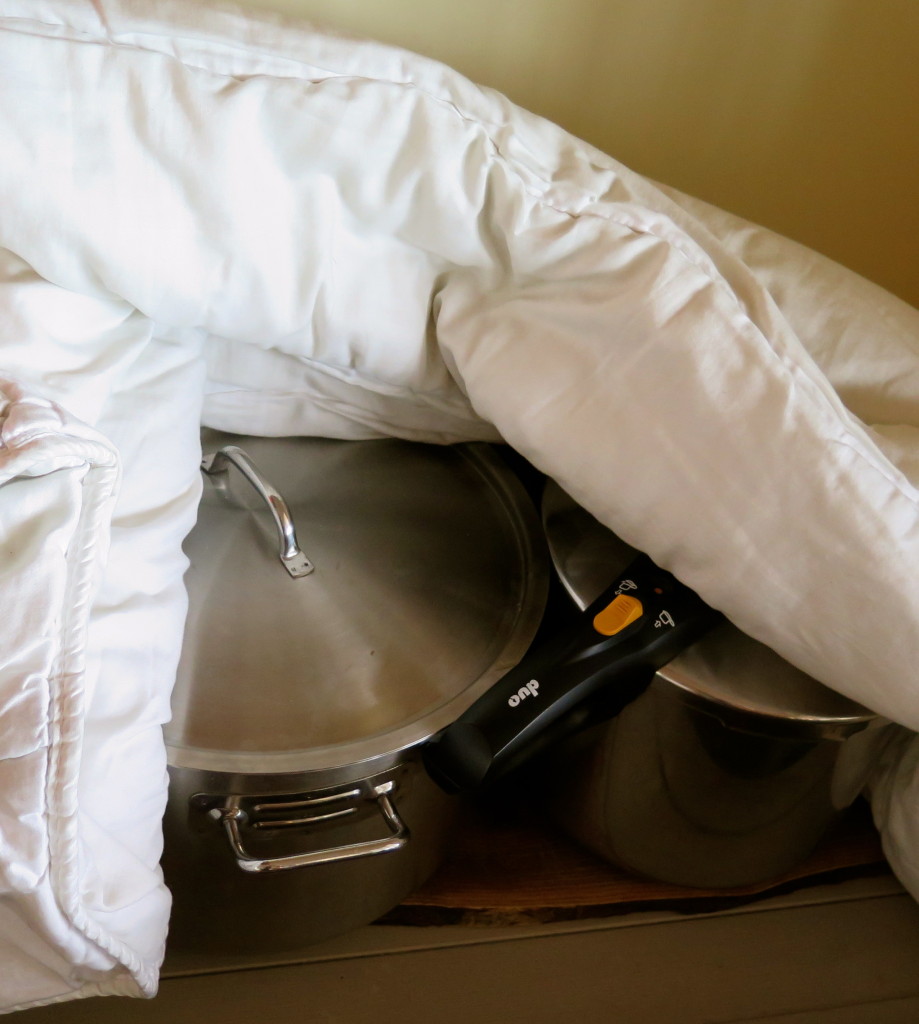 The next process is called “lautering” – basically trying to get the sweet malty water separated from the grains.  Here we have press-ganged an urn into service.  It has a “false floor” consisting of an upturned collander and cheesecloth.  Hot water (around 75 degrees) is poured in the top and malty water drained from below. This keeps on going until you have washed as much sweetness out as possible.  More recently I’ve been doing the entire first malting process in the urn. It saves one whole process of transferring hot liquid in heavy saucepans.  It’s also worthwhile to note that brew shops are full of specialty brewing equipment – so you don’t have to have to improvise with your kitchen implements.  Most of these purpose-made tools would make your brewing process easier, but definitely more expensive.

The next step is boiling the “wort”.  That’s the name given to this sticky sweet liquid.  Over the course of around one hour a variety of hops are added to the wort.   Boiling the wort also sterilises the it, ensuring your preferred yeast strain flourishes.  From now on, you should be concerned about sterilising everything that touches the brew. Next up, you can start adding your dried hops which are the bittering and flavouring agent – they also help to preserve the beer.  The amount of hops, the timing of the addition and the variety will contribute greatly to the final taste of the brew. Hops are added in stages over an hour, this allows different flavours to develop in the boil (much like tea has different flavours the longer it is left).  Also note that different hop varieties have different flavours and amounts of bitterness.  Be careful when starting out because too many hops can turn a good brew bad. After the wort has boiled it’s strained into a brew barrel – I use 25 litre plastic barrels, but glass carboys work as well.  At this point we need to cool down the wort as quickly as possible.  I place the barrel in a large tub (actually baby bath) and add cold water.  This approach creates a lot of surface area to cool the brew, it usually takes around 30 minutes. 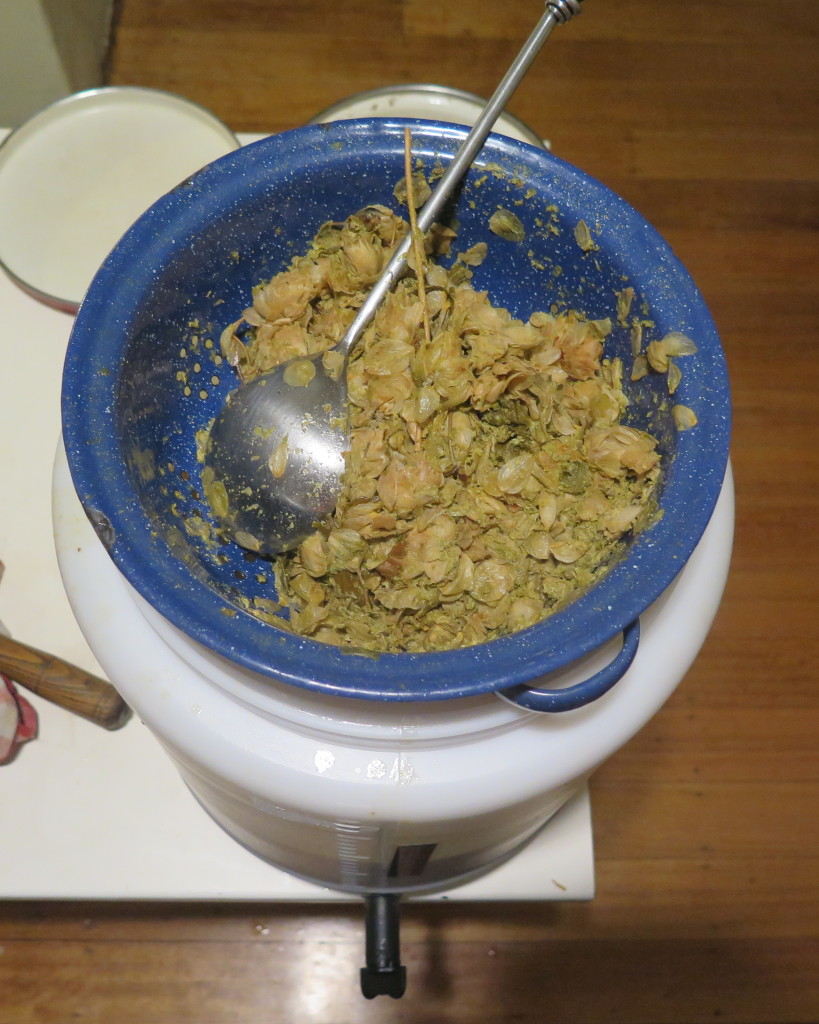 Once the wort is cool, I give the brew a strong stir to introduce oxygen and then add brewing yeast. Brewing yeast is available in packets from brew shops. It’s also fairly easy to use the remains of a previous brew batch to start the next brew, or even recover yeast from shop-bought beers.  Be careful with this process because contaminated yeast can make the previous hours of hard work turn to vinegar – you have been warned.

It normally takes around two weeks for the brew to do its “primary fermentation”. At the end of this process all of the available sugars have been converted by the yeast into alchohol.  During this process it will have released carbon dioxide and if you have installed an airlock on the brew barrel you would’ve heard it bubbling along.

After the brew has stopped bubbling it’s placed into bottles along with a small amount of sugar or malt. This addition of sugar is the “secondary fermentation” and as the yeast releases carbon dioxide it’s trapped in the sealed bottle and makes those refreshing bubbles we know and love.

Its a good idea to label your beer, a marker pen on the lid does the job. 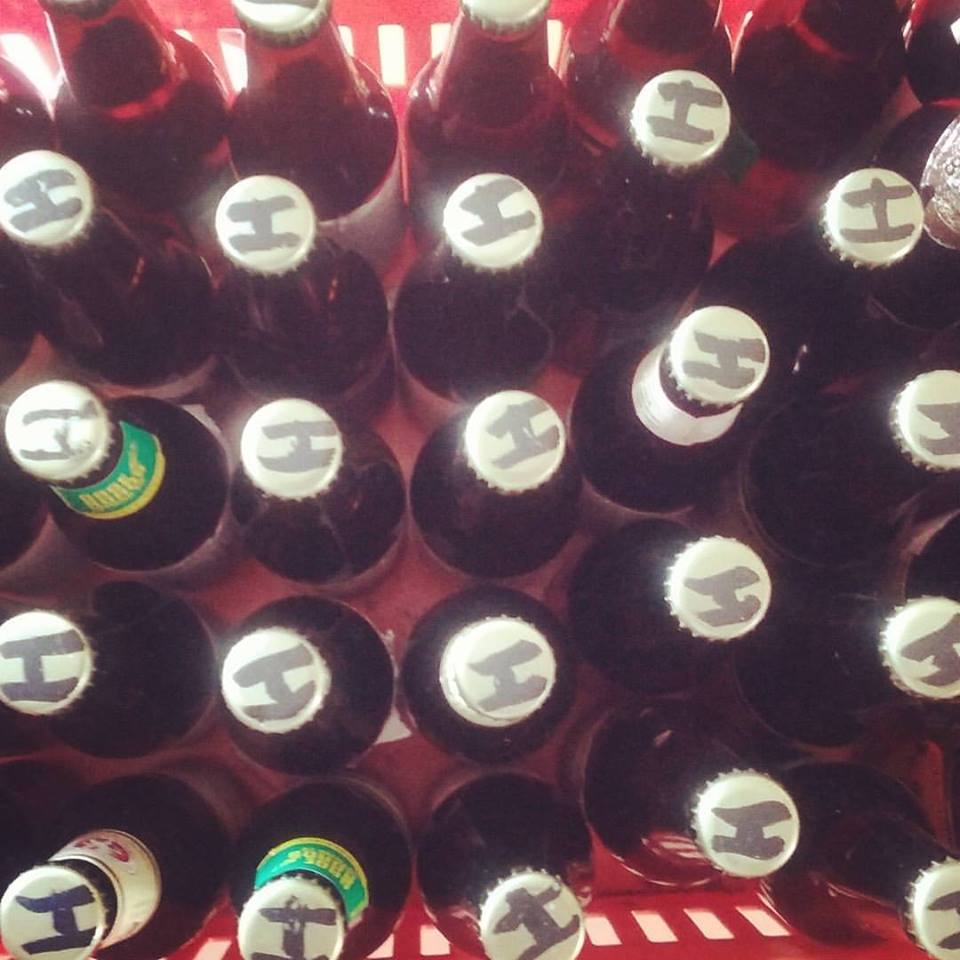 Or you can make some special labels, below you can see some bottles we prepared for our mate’s wedding.

The joys of homebrew are endless – from making it to sharing it with mates, it just keeps on giving. It’s one less thing we buy and one more thing we make – adding to our home-based approach to living. Taking responsibility for our needs is one of the most satisfying things for us, and while beer isn’t technically a “need” it’s a perk of life we like to enjoy every now and then (preferably with excellent humans). And obviously, we advocate for sensible and smart consumption – look after your brain cells and keep it all in moderation :-).

3 Responses to “Brewing Beer From Scratch”

On top of kunanyi/Mt Wellington earlier today and