There are *many* variations on how to preserve tomatoes, this is how we do it using the fowler vacola system. If you have a better way, we’re very happy to hear about it :-).

We don’t have enough space to grow all the tomatoes we would like to preserve in our garden as we prioritise growing a diverse range of crops, meaning the tomatoes we do grow are for eating fresh only. So when Autumn comes around we buy a big stash of tomoatoes from a local grower (it’s different every year). This year, I got a little carried away and bought 60kgs worth – cause being able to crack open a jar of tomatoes in the middle of winter or spring is one of the better things in life. I have my priorities right.

First step in the whole process is get a mate (or mates) over and start chopping – it’s a great way to catch up with dear friends. 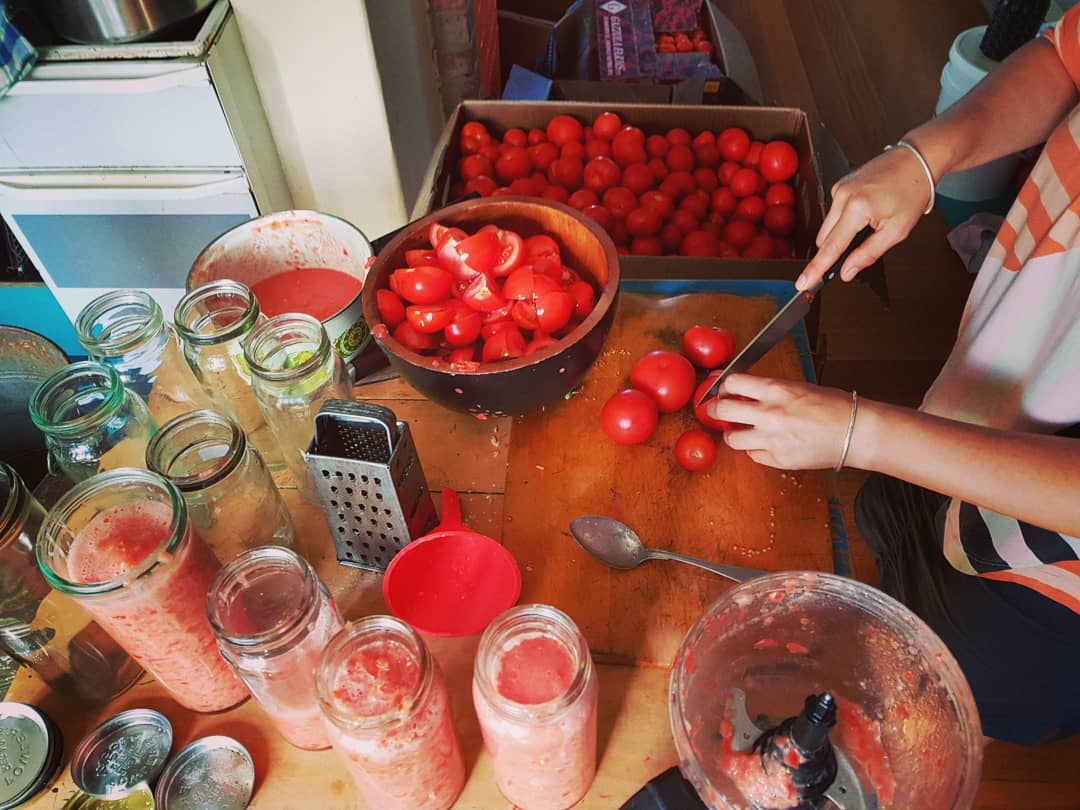 The second step involved us realising/remembering we could just use the fancy food processer my sister recently passed on to me. While a bit noisy, this was infinitely quicker – we loved it. 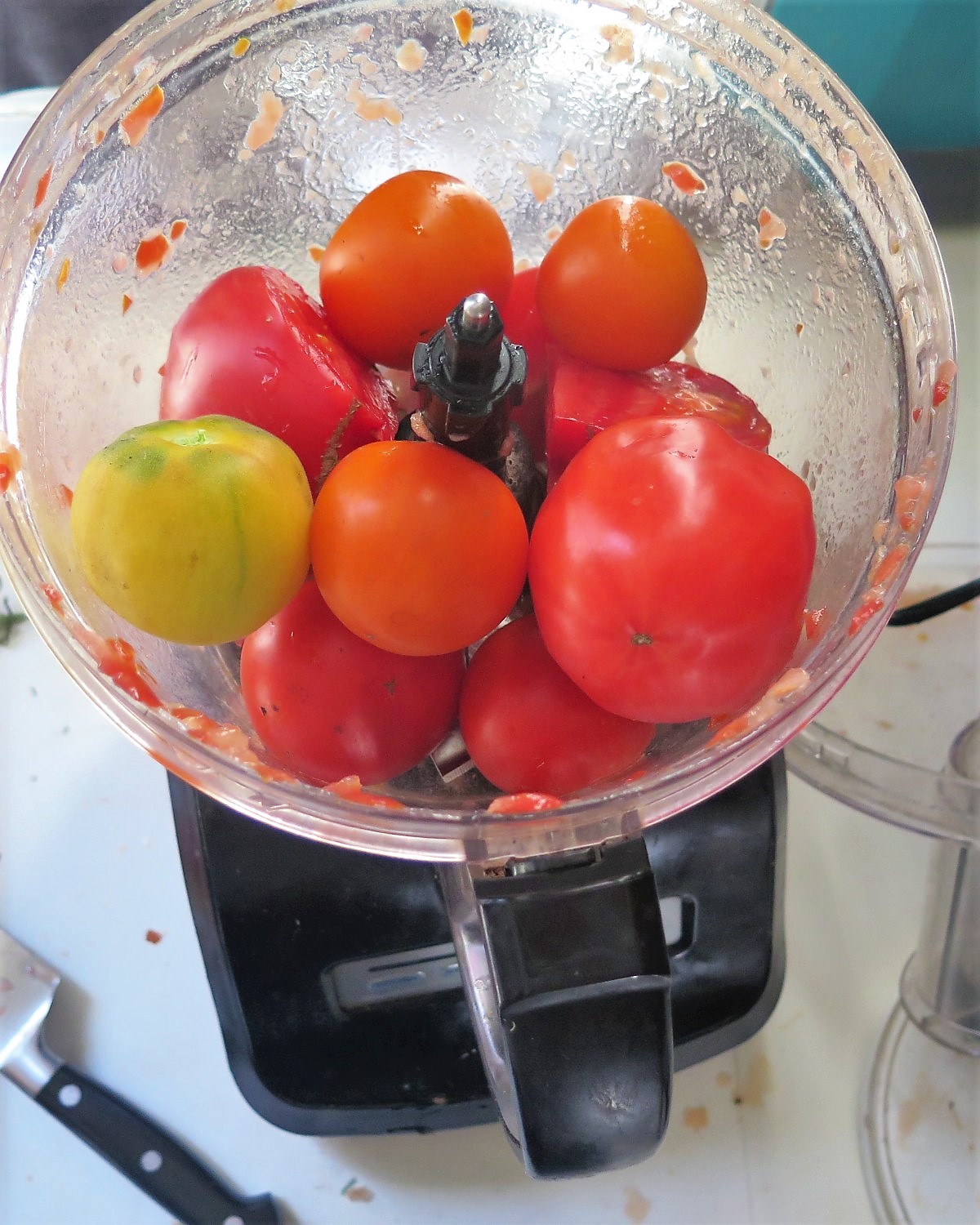 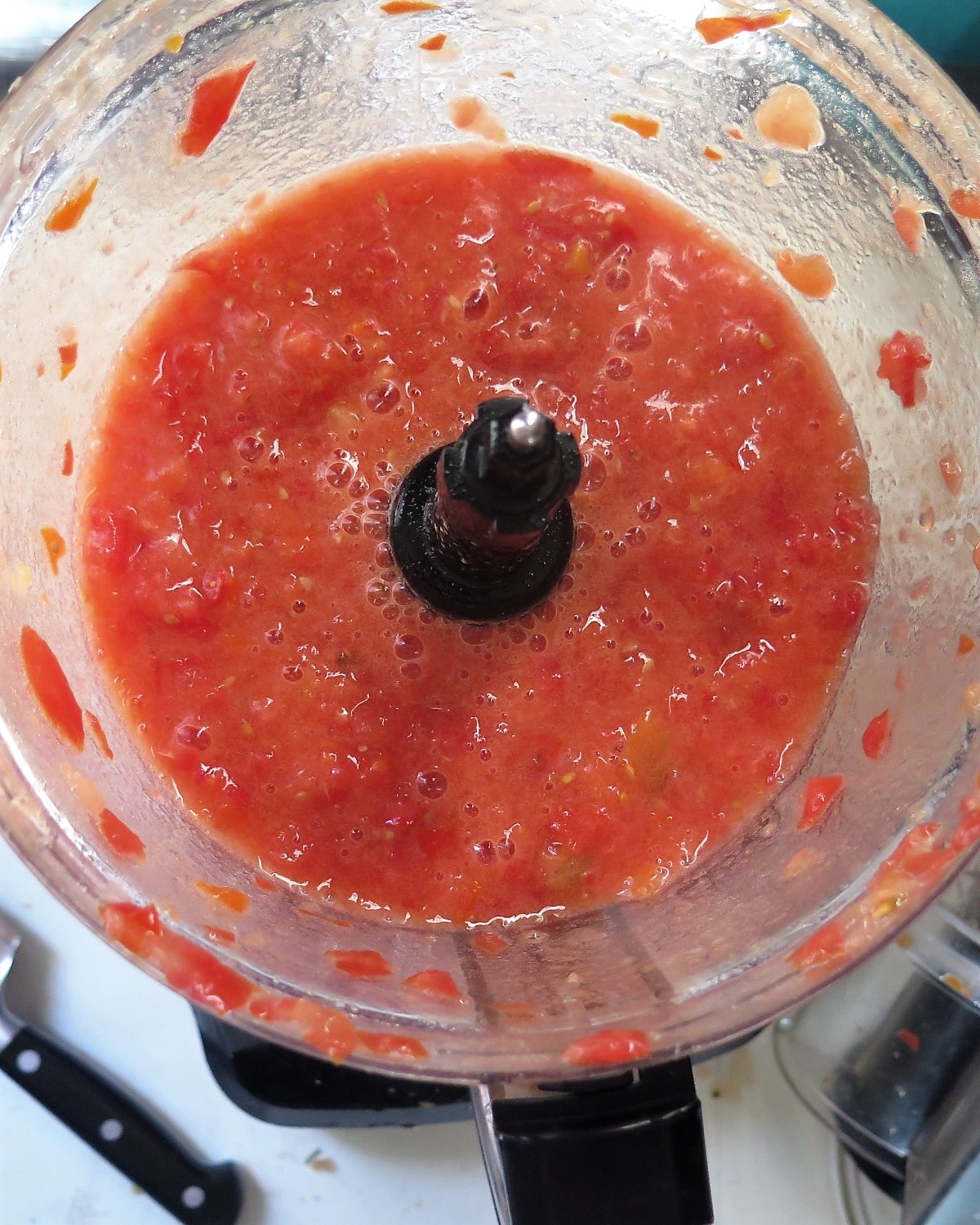 Because our tomatoes were a bit on the funky side, we chose to put them in a large pot and bring them to the boil to get rid of any unwanted bacteria.

If you’re using fresh tomatoes you don’t have to cook them before putting them into the jar. You can chop or whiz them up and place them directly into the jar you’re storing them in. You can see how our friends over at Milkwood do it here.

UPDATE: (April 2nd, 2018). A community service announcement from our expereince of whizzing them up in our food processer and NOT cooking them before we put them into our jars. We’re not 100% sure why, but around a week or so after they were completed the jars that hadn’t been pre-cooked popped their lids and started going mouldy. The tomatoes we whizzed up and pre-cooked before putting them in the jars are currently fine – however they’ve seperated into liquids and solids within the jar so look strange. I opened one to see if it was going funky and it was fine, but we’re keeping an eye on them. Our conclusion is that whizzing them up in our particular food processer seems to have given them a strange consistency. Maybe if we used purley sauce tomatoes this wouldn’t happen? We’re not sure – but felt we had to tell you. For now, we’re back to chopping, pre-cooking (just bringing them to the boil) and THEN putting them into tjars and water canning them as outlined below as we knoe this works fantastically… 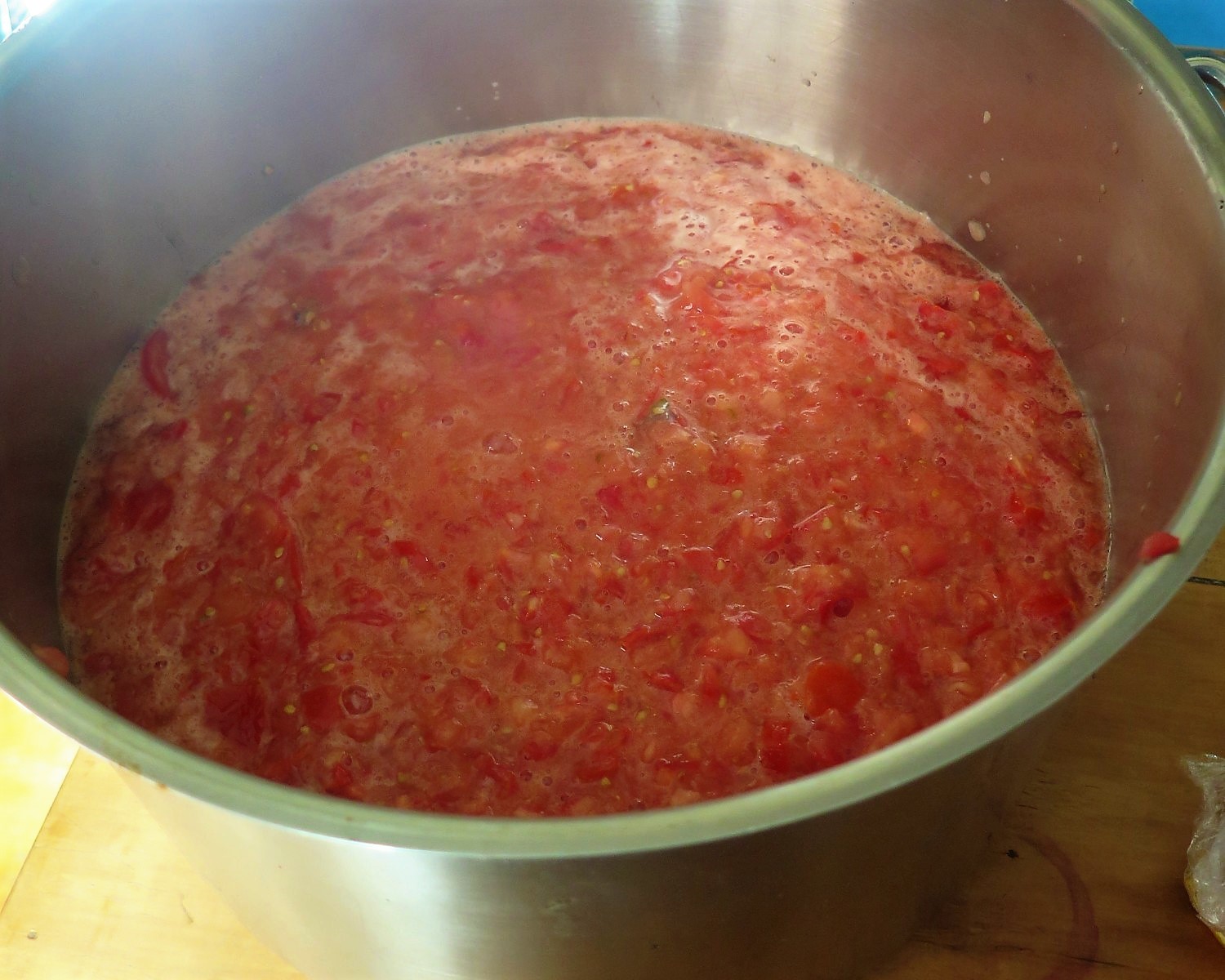 After we had bought it to the boil, we took it off the heat, let it cool down (so it was easy to handle) and filled the jars. The fowler vacola lid involves putting a thick rubber preserving ring on the glass rim, then the metal lid and finally the two clips to keep it all together. 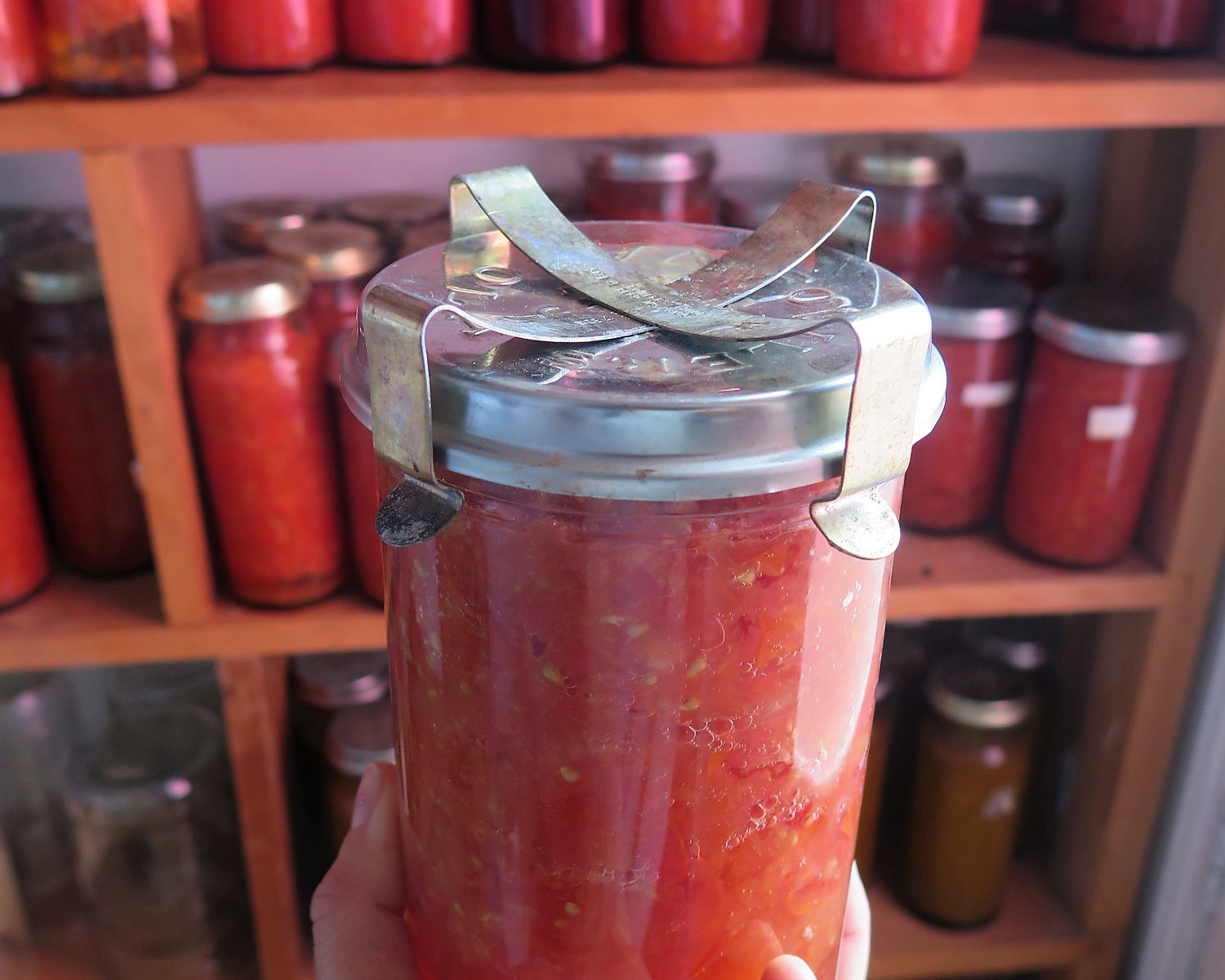 Once you’ve filled your jars, put them in a large pot. We hapen to have a fowler vacola pot (from the op shop), it has an inbuilt false floor so the glass jars aren’t directly touching the bottom of the pot. If you don’t have one, you can use any large pot – in the past I’ve put a whole bunch of cutlery on the bottom of the pot to act as a false floor and sat the jars on top of them – this works fine. 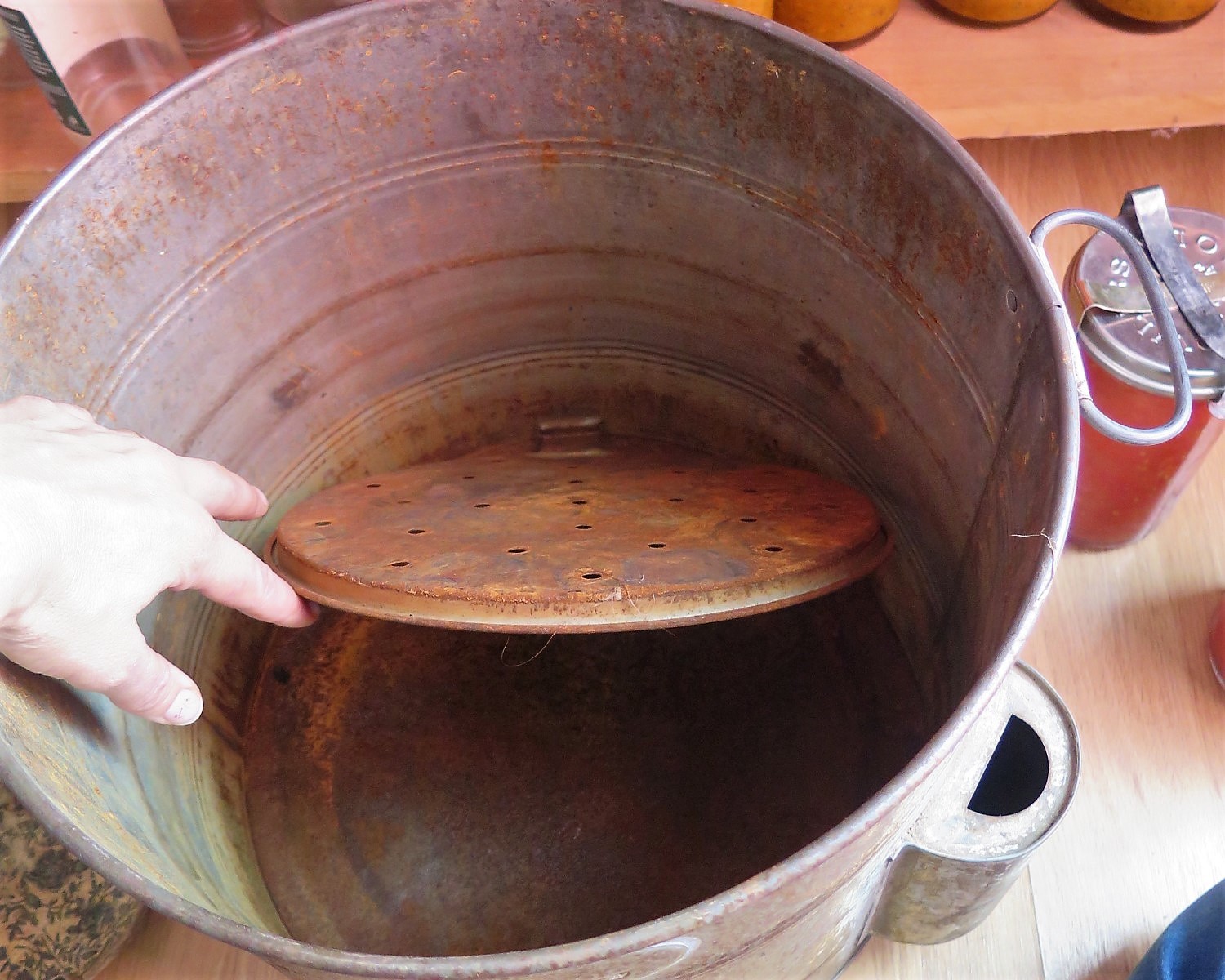 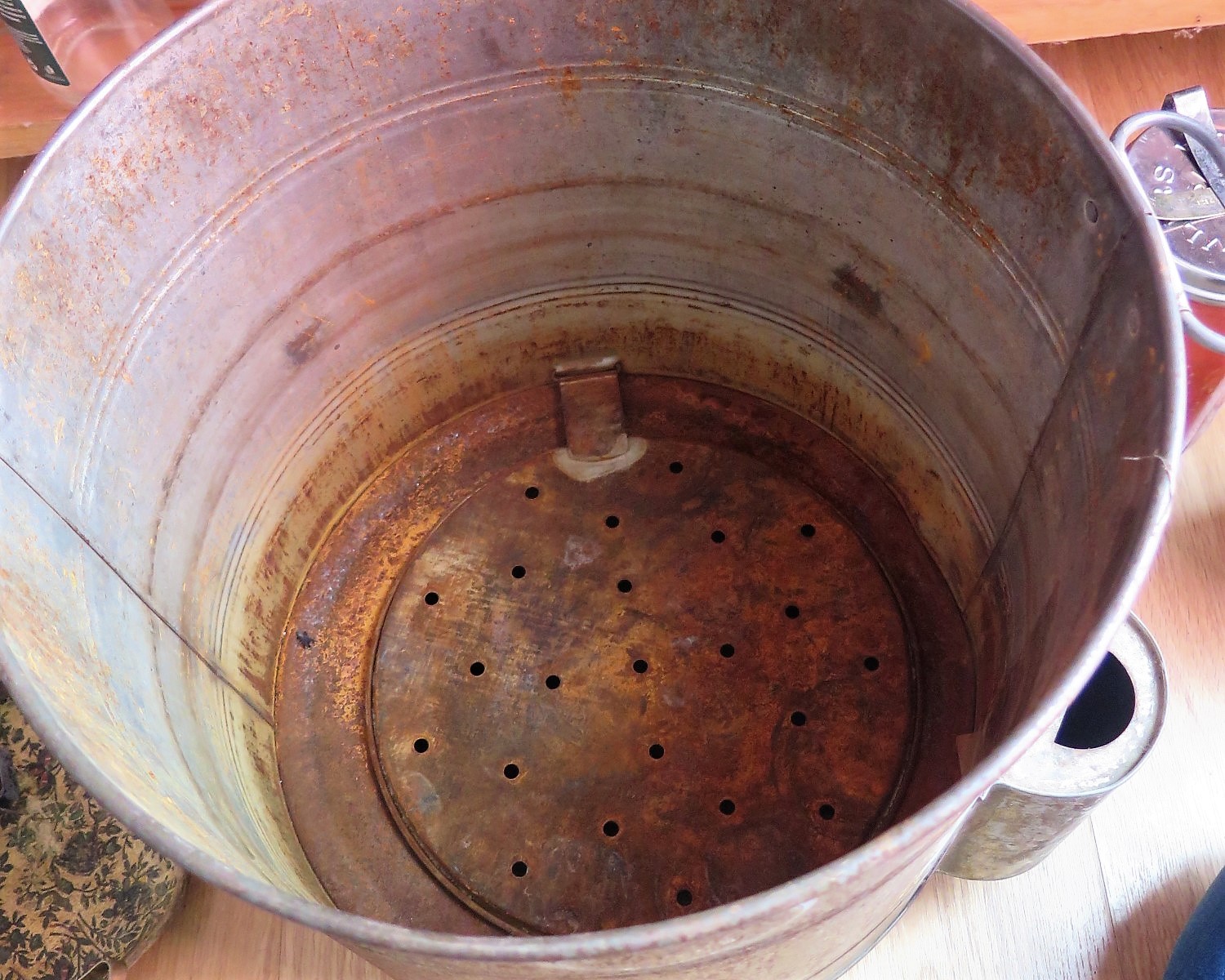 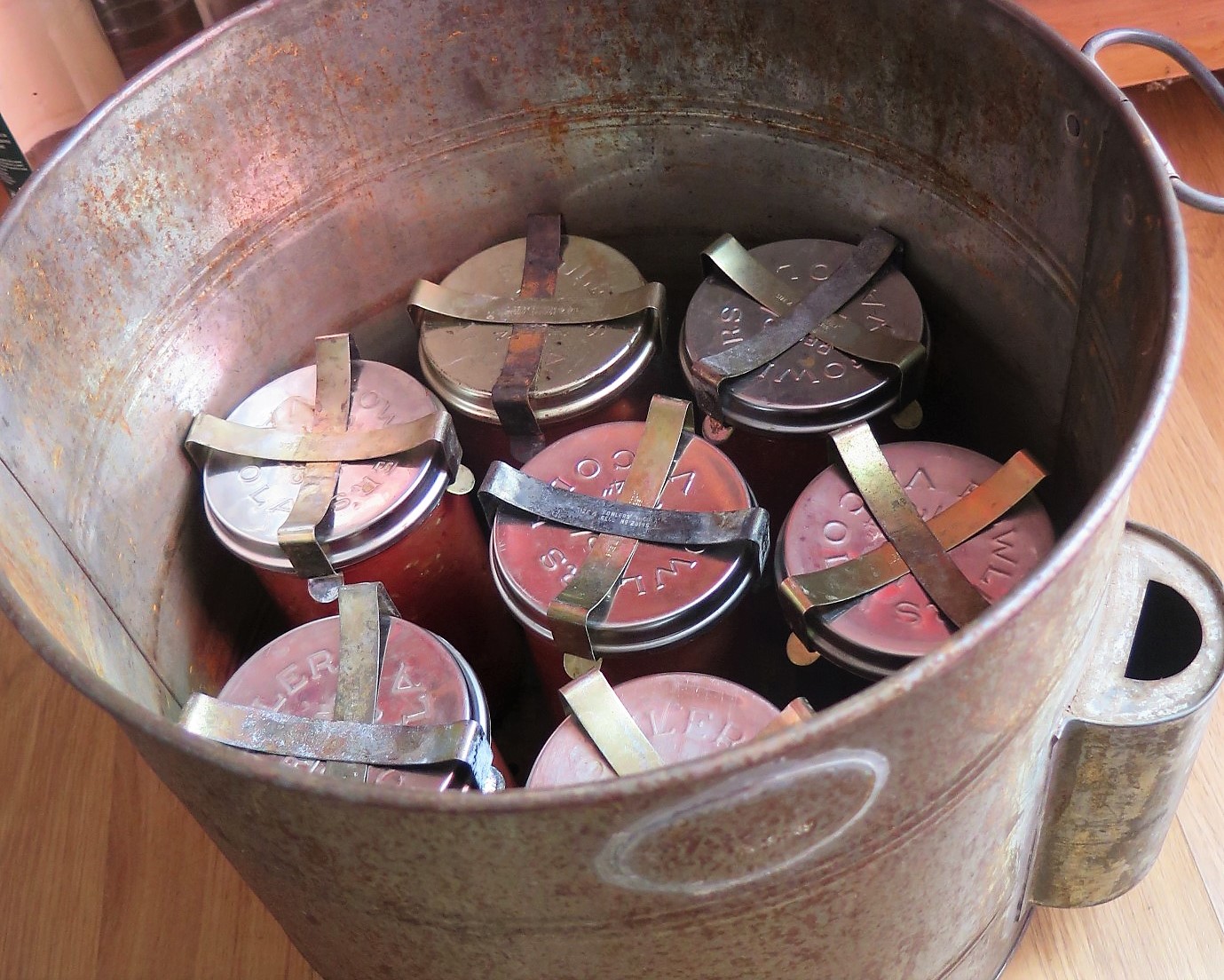 Once the jars are all tucked in, fill the pot up with water to around 3/4 of the jar’s height. Then bring it to the boil on the stove. Once boiling, turn the heat down to a healthy simmer for around 40 mintues.

After this you’re finished! Take them out of the pot and keep the clamps on for another 12 hours or so to make sure the heat seal has worked.

Remove the clips and add them to your shelves/pantry/kitchen cupboards. Only once our pantry shelves are full do we feel like we can enter winter with our heads held high.

And I’ll just leave you with a photo of our daughter with one of our home grown toms (unknown variety), because – well, love. 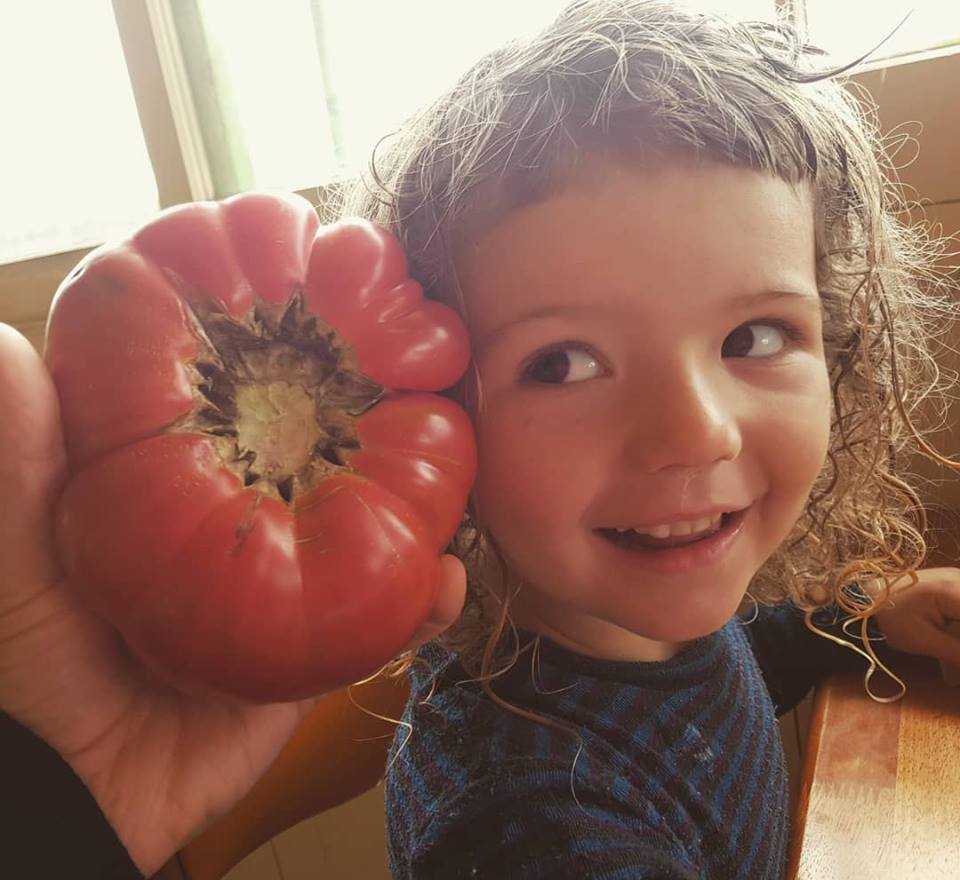