Inspired by a photo (seen below) we saw from our mates who used to run Urban Bush Carpenters, I organised a worm farm seat to be made at our recent Permaculture Design Course by our *wonderful* Course Coordinator, Blake Harder. 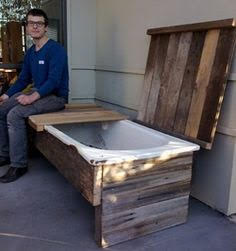 The key functions of this particular worm farm are to process food scraps from the kitchen – providing worm castings and worm wee for the kitchen garden nearby. It’s also central to the social area that’s integrated into the same area, providing a big comfy seat for a few people to hang out on.

In case you don’t know about compost worms yet, they’re highly beneficial for the soil and food crops – you can read about them here. In short, they’re awesome and you want them.

Blake built it out of an old bathtub and timber, only the screws and hinges were bought from the local hardware. We didn’t quite manage to take step-by-step photos of the process as we were all a bit busy (sorry), however here are some of Blake’s sketches and photos of the students filling it up and getting it operational… After watching Blake build the worm farm between classes, the students finally got to come out and help finish it off. Blake thought it best to surprise them all by hiding in the empty worm farm and jumping out at just the right moment. It was a very, very good surprise. Crucial to a good worm farm is drainage. Blake made a false floor out of lattice and shade cloth which is cut to the right size that it can wedge into the bathtub nicely, leaving a gap that’s approximately 10cm deep, plenty of room for the worm wee to travel through the plug hole and letting in good air to the system. James and Blake showcasing the false floor which is cut to just the right size so it wedges into the bath tub, approximately 10cm from the bottom. 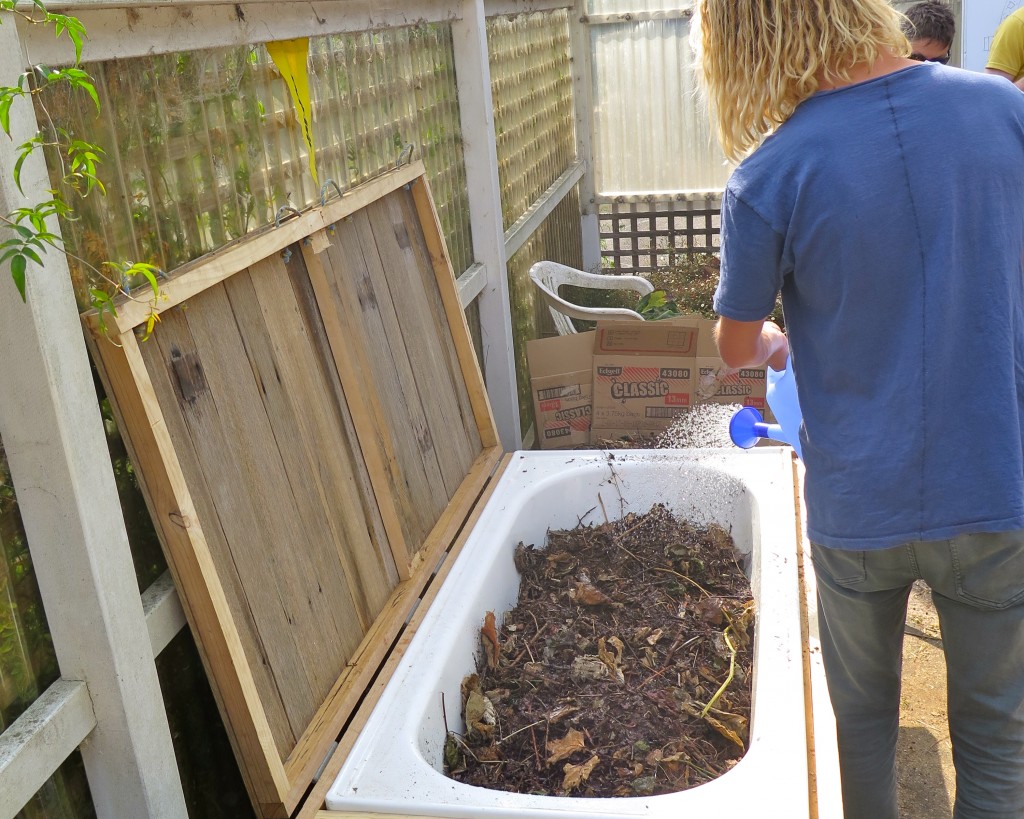 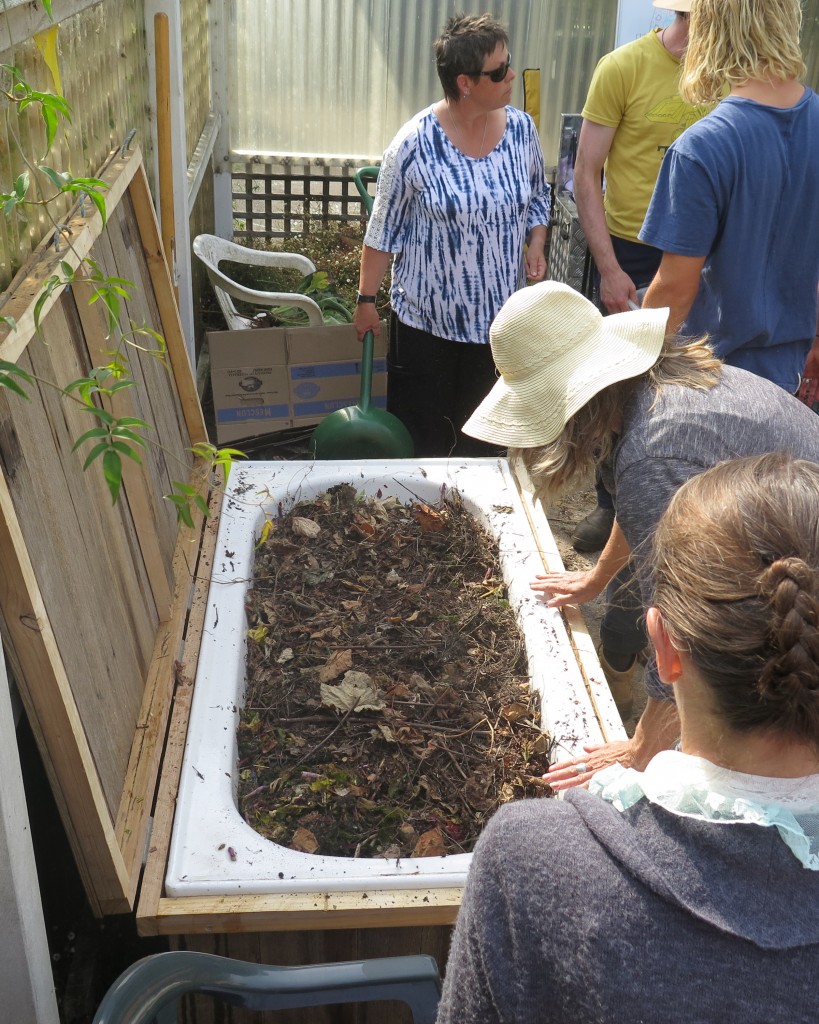 We emptied the compost worms into the top of the bath and quickly covered them as they hate sunlight. So quickly, I didn’t get a chance to get their photo. Bummer.

To help moderate the moisture and temperature levels, we put a simple layer of damp cardboard on top. You could also use newspaper, hessian or thick pads of straw. I generally recommend against using carpet as most modern carpet has heavy glues in it which will harm the worms. Directly below the bathtub’s plug hole sits a bucket to collect the “worm wee” which can then be diluted and placed on the garden. You could build your worm farm slightly higher so you can have a large bucket beneath it, or find a bucket with a bigger capacity (and is still short) – whatever works for you. Some nifty handles made from old rope. Easy! The finished product. We’re in love with this design and are looking at making our own version suited to our home. We’re also a big fan of Blake, he’s an absolute legend, a highly organised, passionate, “can-do” permaculturalist – our kind of guy. If you need help with almost anything, we can’t recommend him high enough. 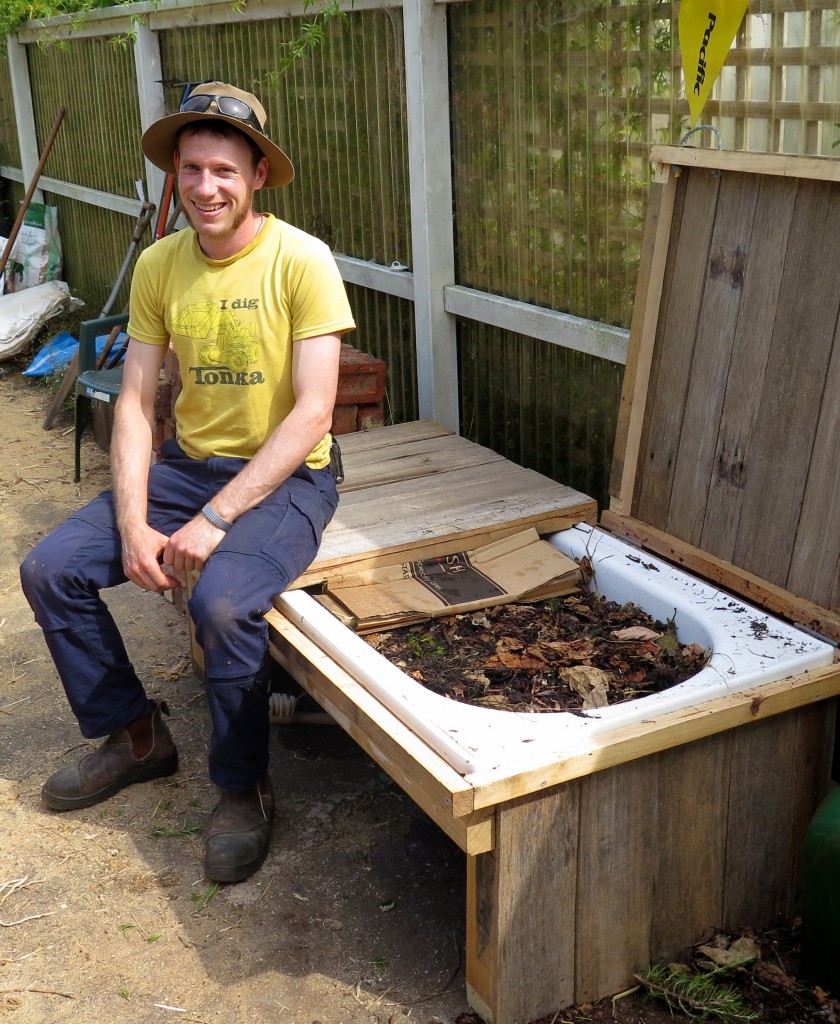 11 Responses to “The Worm Farm Seat”