We have two female toggenburg goats, Gerty (the mum) and her daughter Jilly Love Face.

Despite having some wonderful “goat friends” locally and in other parts of the country, I still found it hard to get information on how to set up our urban system which we did in September 2017. This is the blog I wish I could have read at the time – hopefully it helps a few folks out there looking to give urban goat keeping (and milking) a go. Our main incentive to have goats is to be able to access ethical dairy. While we have just over 3/4 of an acre, we’re less than 3kms from Hobart city, so it’s very urban all around us. Our property is incredibly steep which meant we terraced it to form some functional spaces. Our two goats live on one of these terraces. They don’t free-range across the whole property as we have extensive vegetable gardens and large orchards they would destroy, instead we tether them around the garden at key points where they can eat grass and shrubs. We also take them for little walks down the local bush track to get some exercise. 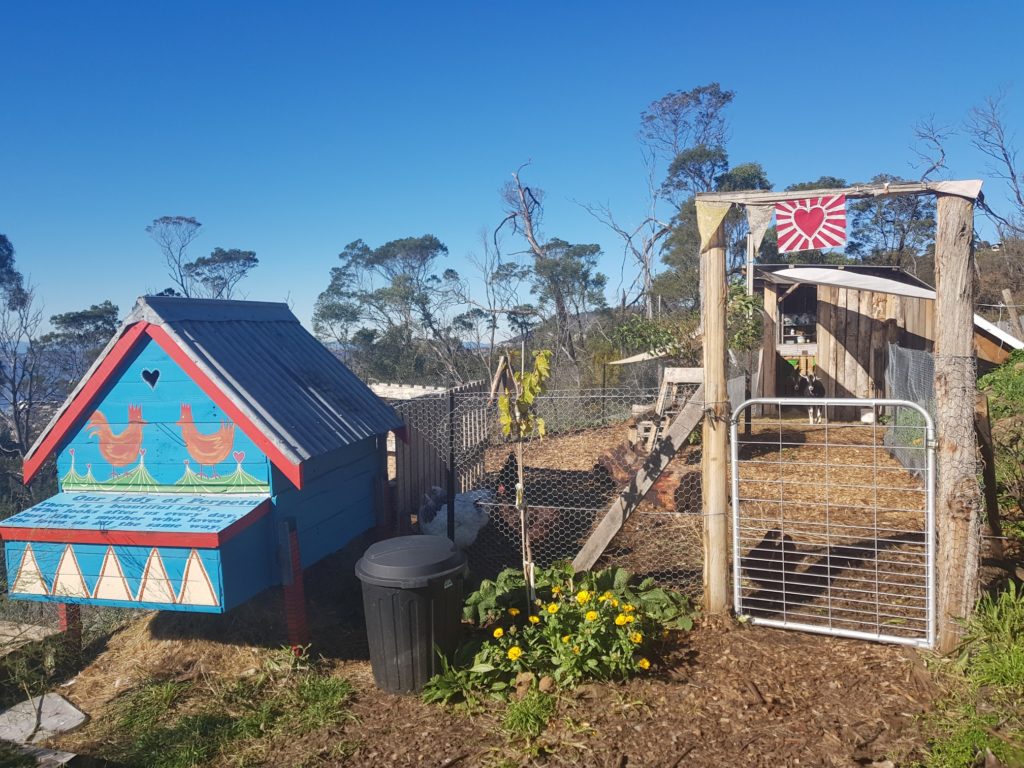 The front gate leading into the goat yard. The chickens also share this space – that’s their blue house on the left.

The two breeds I know that are appropriate for this type of goat keeping are toggenburgs and saanens. I’m sure there are more, I just don’t know about them.

What do we feed them?

What fresh fodder? We have a lot of weedy bushland to the south of our property that’s on Council land. We harvest weeds from here and occasionally allow them to graze there (with us). We also chop and feed them fresh prunings from our weedy windbreak (featurning Cotoneaster and Pittosporum trees).

We also tether them around our garden on a 4m chain in key areas where they can eat grass, herbs and shrubs – but not our food crops.

Plus we’re growing fodder trees for them. This includes silver wattles and tagasaste (tree lucerne) that have self sewn on our land. We tansplant the baby seedlings to where we want them to grow and will prune them over the coming years to an appropriate shape for our garden. Here’s a list of plants you can and can’t feed your goats.

Mineral supplements: We also have a mineral lick permanently available in their shed, it has 16 ingredients ranging from copper, calcium, phosphorous, bentonite, iodine, iron and more.

I also have some seaweed meal I add into their feed bucket occasionally, however if they don’t want it, they’ll somehow manage to leave most of it in the bucket.

Interestingly, goats don’t eat everything. They’re incredibly fussy eaters and I spent a sh*t load of time working out their diet for our urban context. We’re now in a good rythym, but those first few months were hard work. Frida with Jilly who’s being tethered near a comfrey patch for her munching pleasure. How big is their permanent yard?

Their permanent yard is approximately 70m2 which includes their shed.

Importantly, we make sure there’s always a thick layer of woodchips and/or straw on the ground so there’s never any risk of them being on bare soil or mud.

We’ve also arranged some timber pallets and logs for them to run and jump on – goats will get board if they don’t have an obstacle course they can play on.

Isn’t that a bit small?

It would be if that’s where they spent all their time. We also walk them and tether them around our garden, so they get a lot of diversity.

What about their fencing?

We don’t have an electric fence – just standard wallaby fencing with star pickets. This has been mostly fine – with one exception when Jilly was on heat* and somehow got out. We assume she jumped the fence, but we didn’t see it happen and it hasn’t happened again – fingers crossed.

EDIT (2021): A year or so ago we upgraded their fence to have strong hardwood timber with mesh in between. As goats love to use fences to scratch their backs on, this timber version is much more robust :-).

*Goats turn into lunatics when their on heat – she’s since returned to her normal, chill – but perky self. You can see the fence to the right – it’s a bit wavy as they like to scratch their backs on it. We just need to tighten it up a bit, otherwise it’s fine.

We built the shed from recycled timber, timber flitches and other materials including relocated slabs of concrete the excavator pulled up from our garden – this forms the floor (which has straw on top). The shed has three sections; Our goat shed plan – not to scale While we’ve planted lots of trees all around the goat yard, there’s currently no natural shade – hence the shade sales. Over this next year I’d like to make them another shade shelter as the summer’s are so hot here. Two 44 gallon drums for storing feed – keeps the rodents out of it. Jilly with the milking stand to her right Milk for us and the baby goat

We keep Jilly and Gerty together all day, meaning when she was still feeding, Jilly could help herself to milk as needed. Every night around 9/10pm, I’d place her in the small pen (with straw and water) so she wouldn’t drink all the milk over night. Early each morning (at sunrise) I would then milk Gerty for our own use. Directly after this, I’d let Jilly out of her pen and they’d be together for the next 16 hours of so. This worked well up until Jilly was weaned…

How did we wean Jilly, the young goat?

We didn’t. We let Gerty (her mum) make this happen. Recently (in Autumn 2018) they were both on heat, as Jilly was only 7 months old (and we want to rest Gerty) we didn’t mate them with a buck. Interestingly, once they came off heat Gerty would no longer let Jilly anywhere near her teats.

This was great for us as we really didn’t have a way of weaning Jilly in such a small space. A common way of weaning kids is to put them in a separate paddock than their mums. They can still see each other and kiss noses, but nothing else. We don’t have this option in our space – so we’re quite releaved it happened naturally.

Treating worms and other health issues?

These two goats came off an organic goat farm where they were treated with herbs, minerals and good pasture/food. When they arrived, Jilly was just two days old and in perfect helath, while Gerty was a bit run down from being pregnant and living through a rough winter on pasture. She had a small section of staff on her udder which was spreading, was a bit under weight and had signs of worms. This is what we did…

Staff: After doing an enormous amount of research, spending too much time on goat forums and trying every natural remedy we could, we ended up treating her with zinc cream and lavender oil which our good friend and naturopath, Thea Webb, actually recommended. Within hours this treatment started working – to my absolute relief!

Weight: You can actually buy a product called “weight gain” for livestock, it’s a rich mix of high protein grains you add into your chaff mix. For unknown reasons Gerty would eat around it and not consume any. In small amounts (no more than .6kgs per day per goat) oats and barley are highly effective options as well. I initally ended up spending a bit too much money of organic oats (I panicked) and eventually learned rolled barley is a fraction of the price and just as effective. These days I mix in a small amount of barley (rolled) in with their chaff each morning and night.

Worms: I ended up getting a vet out to check out Gerty as her poo which was forming big clumps instead of small pellets and her eyelids were a pale pink when they should be a vibrant pink colour – both potential symptoms of worms. The vet tested her poo which showed she had small levels of barber pole worm – blood sucking parasites that cause anemia and even death. While they had previously been treated only with essential oils, minerals and fresh pasture, I chose to drench Gerty this one time (at least) as I was sooo out of my depth and wanted to get her back to top health asap. It worked really well and I’m relieved we went down that track. She started putting on weight easily, was a lot more perky and generally “happier”.

These days I’m on a preventative treatment program with worms. Every month I add organic oregano oil mixed with some water into their feed for one week on and one week off – I repeat this for two cycles. So far this appears to be working well. I’m still on a steep learning curve with goat health, so watch this space for more preventative approaches. How economical is having a milking goat?

Buying organic, ethical dairy from farms we believe in isn’t overly cheap – and neither should it be. We would easily spend around $50 per week on milk, yoghurt and some cheese.

Buying food for our two goats for one month is roughly around $150, so a bit cheaper than buying organic, ethical dairy*. However we (happily) spend between 30 minutes – 1 hour a day with our goats, so it takes a lot of time – as they should. If we were to price our time in looking after them, then it isn’t economical at all.

But I don’t believe economics should be the only way to measure whether something’s worthwhile doing. Conventional dairy is cheap because it has nasty practices that have negative impacts on the environment and disastrous ramifications for animal wellbeing.

*Update – August 2018: We’ve now stopped buying in feed bales as they weren’t eating them. Instead they have a chaff/barley mix and fresh fodder (tree branches and grass). This has bought the monthly feeding fee down to approximately $70.

Should everyone keep goats for ethical dairy?

No. I don’t think everyone should run out and get dairy goats as it’s not for the faint hearted. They’re very real, big, beautiful animals that need a lot of attention. I think for most people, they should just spend a bit more and buy organic, ethical dairy – in Tasmania, that’s Elgaar Dairy.  We chose to have goats for a few reasons;

A few other things 
I don’t do new year resolutions, but I almost al

Apparently when you sing it benefits your brain, y

My latest story with the wonderful @gardeningaustr