As our Spring crops are gradually going in, we’re making space for some sister action to take place, all three of them – corn, pumpkin and beans – together like they should be.

These three plants are a guild of plants traditionally grown in Native Amerrican agriculture. Dating back to around 5000 years, it is so successful, it’s now on of the most popular “pin ups” for companion planting around the whole world. The symbiotic relationship between these three plants is particularly wonderful, here’s how it all works. 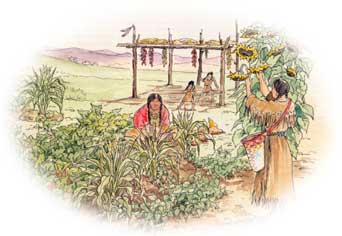 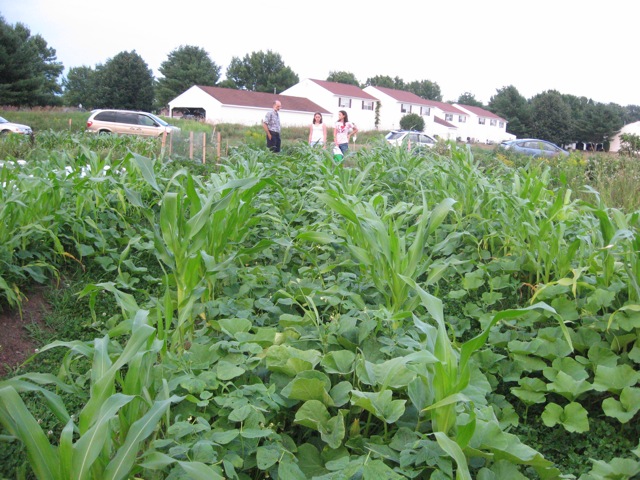 Traditionally grown on a market garden scale, a large amount of diverse food is harvested from a relatively small space. Image from here

Structurally, the corn does what it does best, and grows tall and straight providing the perfect climbing pole for beans to grow up. The beans provide nitrogen to the soil, being heavy feeders, both the corn and pumpkin lap this up for their own use. Meanwhile the squash (generally a type of pumpkin) sprawls in and around the base of these two plants acting as a living mulch with its big, shady leaves. It also helps suppress or slow the growth of weeds due to this pattern of growth.

Apparently corn lacks the amino acids lysine and tryptophan, which the human body needs to make proteins and niacin, but beans contain both and therefore corn and beans together provide a balanced diet. And of course, if one of the crops fail (due to pest or disease) it is ‘backed up’ by another two – so you never go hungry, clever.

If you take a look of each of these plant’s root profiles you’ll notice they all have different root ball shapes where they inhabit different levels of soil meaning they’re not competing for nutrients. So clever, so sophisticated. Image from here. 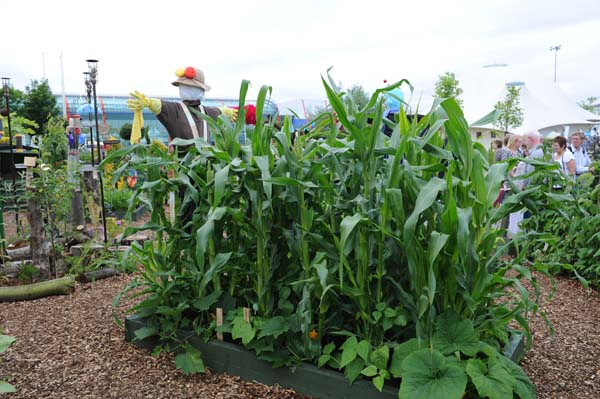 The other great thing about this guild (there are many) is that you can plant it on any scale, so even if you have a small urban garden (like we do) you can still have a productive patch in a relatively small space. We’ve allocated a garden bed roughly 5m x 3m which will include around 16 corn and bean plants and two sprawling pumpkin plants. However we’ve also planted it in smaller beds like the one shown above.

The startings of our three sister garden, still inside – but not for much longer.

Being in a cool temperate climate, we’re yet to establish this year’s three sisters garden outside, but we thought we’d get a head start and get the corn and pumpkins going inside first. They’ll be moving outside in the next week where we’ll direct sew the beans at the base of each corn plant. When you’re planting this guild, be sure to give the corn a head start as the beans grow so fast they’ll quickly catch up to the height of the corn. If you’re in a warmer climate, you can direct sew all three seeds at the same time straight into your garden area, they’ll all go gang busters. Where ever you are, make sure your soil has LOTS of food i.e. manure, compost, as corn and pumpkin are hungry plants and require healthy, nutritious soil to thrive.

To see and learn more about the three sisters, you can watch this short video I helped make back in 2010 about companion planting that features this mighty fine guild, plus a couple of other combinations and related gardening tips.

Utilising companion planting in your urban garden or small farm is a clever approach to getting the most of the area your working with and maximising the benefits for both you, your soil and the plants. Get into it!