Hobart is Australia’s second driest capital city (Adelaide’s first) so catching and storing water is often on my mind. Annually we get approximately 615mm, most of which arrives in the cooler months in and around Winter. During Summer time our soils will dry out so ferociously that some soil types (including ours) will form cracks big enough to stick your hand a good foot into them. When we first bought our place in mid Summer 2012 we walked across the lawn-scape and had to be careful not the slip into the cracks and twist our ankles – seriously, they were that big.

So as soon as we could we shaped the land to catch, slow and sink water into the soil in every possible way. First up, we had an excavator come through to terrace the back half of the block. All the terraces are angled slightly back on themselves to guide the water into the slope rather than letting it slide off the slope. On top of this we designed the key artery pathways to be swale pathways (the blue lines shown below). These are placed on the inside of the terrace where they catch all the excess water that the terraces guide back into the slope. But lets back up here a minute and make sure we’re clear on what a swale actually is. A swale is a ditch dug on contour – this means that water is not draining in one direction, instead it spreads evenly across the slope and sinks into the soil. Traditionally, the earth that is dug out is placed on the downhill side and planted out with with a mixture of perennial and annual crops (but always perennial to ensure that the earth is stabilized with good long-term root structure). As we’ve made deep terraces, our garden is a variation of this, but still receives the same benefits – water in the ground. 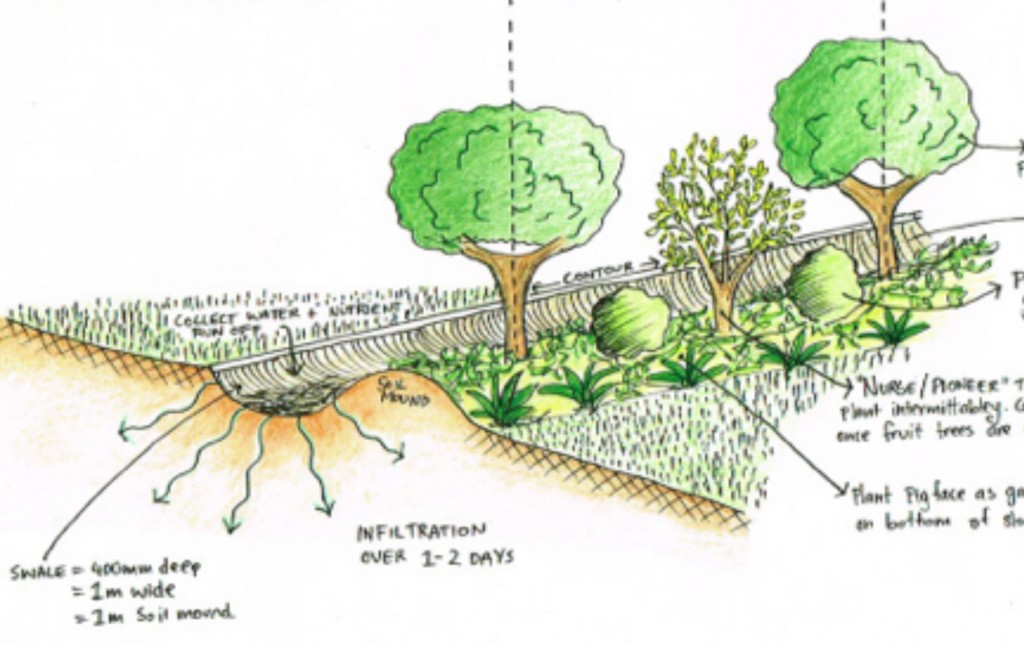 A diagram of a traditional swale system

A hot tip is to remember that you always need to plan for flood and have an overflow system, even when you live in the second driest capital city in Australia. This can be a pipe or drain which directs the excess water to another swale, pond, orchard, dam or storm water drain. What system you choose will all depend on where you are and what is appropriate for your property. Eventually (we haven’t quite finished it yet) our overflow system will be directed into a series of ponds and additional swales which will end up in our orchard which we’re planting out in the front half of our block this Winter.

It rained as soon as we dug the swale which allowed us to see the amount of water it actually holds (left) – a lot! We then lined it with cardboard to prevent any unwanted plants growing up and filled it with sawdust (right). When it rains no muddy puddles form, instead there’s just soft spongy sawdust paths – nice! January 2014, the swale path has now settled in and the young food forest (left) and tomatoes (right) are loving it.

It’s now just over one year since we’ve moved into our home and the section where we’ve applied these water storing techniques is largely under cultivation. There’s still lots to do, but it’s happily unrecognizable from this time last year. The great thing about this water system is that it’s PASSIVE, now that it’s in place our work load has been reduced. We’re still going to install drip line irrigation, but through establishing this passive water framework and mulching throughout the warmer months, we’ve drastically reduced the need for irrigation and that’s a major step in the right direction in creating a stable and resilient system – yay!. So, do I need an excavator to have swales? I hear you ask.

No, absolutely not, is the heart felt answer. As someone who rented for over 10 years and lived in 25 houses I’m passionate about affordable, transferable and effective strategies which can be scaled up or down.

Swales can be hand dug and one metre long. Always come back to the function it’s performing which is simply to catch and store water in your soil. You can obviously do this on small or large scales, while renting I would often dig swale paths with my mattock as seen below. Rental property, 2012. Narrow swale paths with ag pipe (a pipe punctured with holes throughout) – we directed our laundry water or garden hose into this pipe

As these particular swale were quite small, we increased their capacity by laying ag pipe down which we could then plug a hose into from a laundry and bathroom. Using grey water to irrigate crops is technically not smiled upon. However please keep in mind we put no nasty chemicals in there and alternated where the water was directed to, so there was no build up of any nutrients which can affect soil health. On top of this no water touched the surface or leaves of plants – it headed straight underground. In our experience when managed properly this is a great way to return water to the soil instead of sending it down the storm water drain.

So there you go, swale paths are for all shapes and sizes and can play a clever and effective role in catching, storing and sinking water into our thirsty landscapes.

Fabulous resources you should check out

*Your blogger is Hannah Moloney: Co-director of Good Life Permaculture and lover of all things fun and garden-esk