When keeping animals in domestic yards you need to avoid having bare earth, instead you can have a deep litter.

A deep litter imitates a forest floor which is soft and spongy – made up of deep layers of carbon and nitrogen (fresh and old leaves, sticks, branches, dead animals, rainfall etc). Some folks refer to it as a slow, composting system as the end product can be cycled back into your edible landscapes. Without a deep litter your animals end up living on bare earth which becomes problematic with the build up of their manure. Without any carbon materials (straw, woodchips, hay, mulchy stuff) to absorb and balance out the manure, the whole yard becomes stinky and gross which can compromise the health of the animals. Not cool.

In our home we have a deep litter system for our chook and goat yard – they share this space with the chooks who also access a nearby forage space through a little passage way. Around two times a year we dig out the run and replace it with fresh woodchips. In between these times I’ll often add a thin layer of woodchips as a little top up – especially during winter when it’s very damp. By the time it’s ready to be dug out it’s already half composted material (see below). It’s beautiful, doesn’t smell gross and is well on its way to becoming invaluable compost for our food systems. 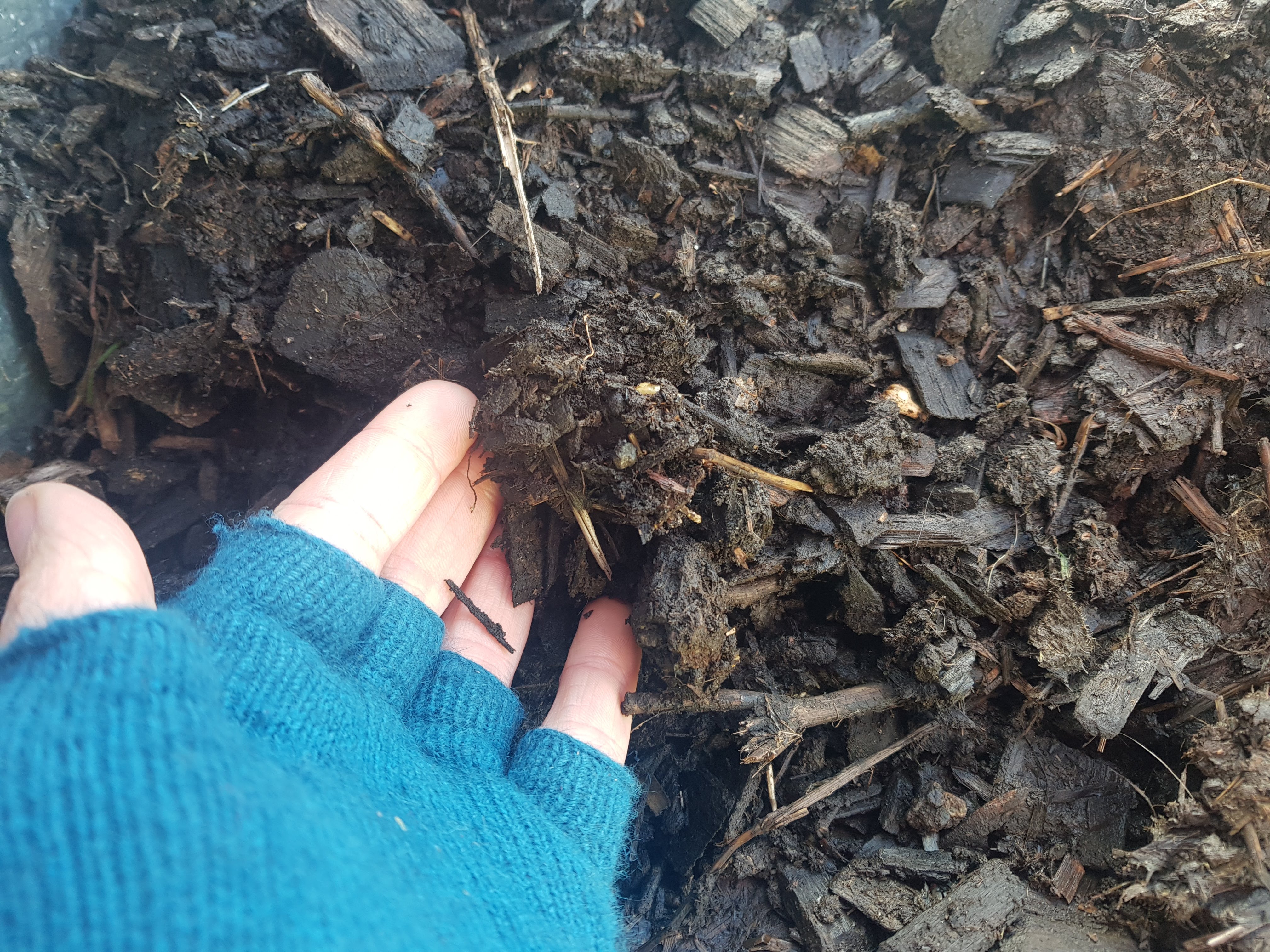 Half composted woodchips, mixed with goat/chook manure and rainfall.

When we dig it out, the first place we put it is into some compost bays where it’ll sit for quite a few months to finish the composting process. While the finished product will look like stunningly beautiful compost, we learned the hard way that the carbon content is still very high so you’ll most likely still need to add some nitrogen into it so it doesn’t compromise your food crops. Our sad story is that we added some mature compost onto our annual garden beds and then watched in horror as our crops had a major attack of “nitrogen draw down”. This simply means their isn’t enough nitrogen to support healthy plant growth. It was easy to fix (by adding blood and bone), but we lost some time in our precious summer growing season. Won’t be doing that again! Compost station with THE view

I use large, coarse woodchips as they last longer which means I don’t have to dig out the yard as often. You can source woodchips from your local arborist for free or cheap, so it’s worth calling around. Just make sure you check what trees they’ve mulched so you don’t accidentally import lots of weedy seeds. The finished product is highly satisfying for everyone. And for those who are wondering, no the goats don’t eat the woodchips. They definitely have a little nibble but spit them straight back out.

Also, I couldn’t get them to pose for this photo below as Jilly (the black one) is on heat and can’t stand still (or be quiet) and Gerty was trying to get a cuddle from me. I love them.